In many of my previous articles I raised some warning flags about this latest trend toward coring boat bottoms, pointing out the potential for some very serious problems. Those warnings haven't been heeded as numerous builders jump on the cored hull bandwagon.

Well, folks, now the chickens are coming home to roost, only to find that the fox has raided the hen house. You needn't take my word for it, for I will show you actual pictures of the results.

Cored hull bottom failures are starting to show up in increasing numbers, just as I had predicted. After all, the industry went though this ridiculous situation in the 1960's, again in the early 1980's and now in the decade of single digits. The industry love affair with cored bottoms  seems to run in twenty year cycles and here we are again. The market is being filled with cored bottom boats.

Amazingly this re-experimentation with cored bottoms is not just happening with smaller boats, but mainly with very large boats, exactly where you'd least expect it, what with large boats involving such huge sums of money, one would think that large boat builders would be a lot more cautious and conservative. But, no, like a herd of lemmings, many are making a mad dash toward the edge of the cliff.

Sea Ray is a company that has played around a lot with hamburger helper for fiberglass. Over the years it seems they've done everything they could think of to reduce the amount of costly glass and resin they use in their hulls, including the pioneering the "putty boat," hulls that incorporate spray-in polyester filler (stuff that looks exactly like Bond-O autobody filler).

Sea Ray has used cores in their boats for many years, first for decks, then for hull sides, and finally for bottoms. Sea Ray, like most other builders, has had a lot of trouble with rotting cores. They've also had a lot of trouble with their chopped strand mat laminated over plywood hull stringers and other structurals rotting. So you have to wonder, if they can't build plywood cored stringers and balsa cored decks that won't rot away (and which aren't submerged in water), what on earth makes them think that they can build boat bottoms the same way? And with balsa, no less?

Why It's Risky to Buy a Cored Bottom Boat

The risk of water entry into a cored bottom is obvious to most experienced boat owners. It's like having a water-proof watch. Even my Rolex Submariner will, over time, experience the seals aging and going bad and water leaking into the watch. That has already happened twice. Of course, a boat bottom is not built with the precision and care of a Rolex watch, so how much more is it likely to leak? The answer is so much more so that water ingress into the core is almost inevitable over time. 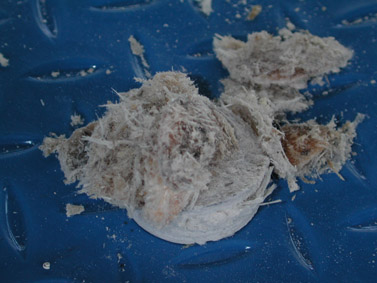 The effects of hydraulic erosion. This test boring of a delaminated cored boat bottom came out as a handful of mush. The brownish color is pulverized balsa. A larger piece of balsa is visible at lower center.

Then there is the risk of improper handling, repairs, alterations, etc. All it takes is for one improperly made screw hole to turn a boat bottom into mush. Mush?  Yep, mush. Take a look at the above photo that illustrates the results of what happens when water gets into a core. These core samples were taken from the bottom of a large Sea Ray which had failed that was only three years old, one of several of this model that had met with the same fate.

What you see there is a bottom laminate that was in the process of completely disintegrating. The reason is that once water gets into a core, a phenomenon called hydraulic erosion takes place. Due to the slamming and pounding of the hull bottom on the sea surface, water contained within a laminate or core will be compressed by the flexing laminate structure. Thus, the bottom literally becomes a diaphragm pump.

Once ply separation occurs, the impacts of hull against water creates hundreds of pounds of hydraulic water pressure within the laminate. The pressure is so strong that it will erode the plastic and shred the glass fibers. And that is exactly what you see in that photo. A hull laminate that has been reduced to a slurry of plastic particles shreds of glass fibers, much like the way the Colorado river carved out the Grand Canyon. 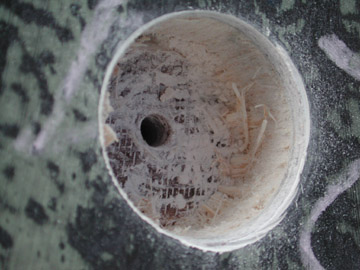 In this shot, the inner laminate is separated from the balsa core. A large amount of dust fell out of this hole when the plug was removed, some of which can be seen stuck to the inner laminate. The dust is pulverized fiberglass from pounding. No water was necessary to fuel the destructive process of laminate breakdown.

People usually think that a balsa cored bottom would be far worse because of the wood's ability to absorb water. So far, the evidence at hand does not support that idea. Foam, because it is much softer, and not at all fibrous, breaks down much faster under hydraulic pressure. In fact, in all the test borings taken on this boat, the balsa itself was yet to break down. The actual failure occurred because the cored bottom panels were not properly terminated at the keel. In this instance, the major ply separations occurred within the solid laminate (containing a LOT of CSM) first. 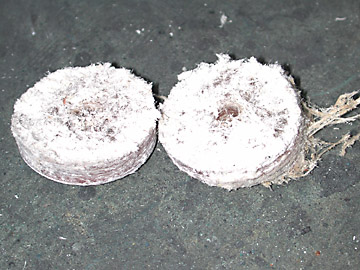 A hull bottom made with a lot of CSM delaminates. The separated pllies grind together and reduce the laminate to dust and shredded fibers as seen here.

The Limitations of Surveys

Unfortunately, core problems are often undetectable during surveys unless the problems are far advanced. That is particularly true when the outer skins are particularly thick and neither sounding nor moisture meters are likely to give an indication of trouble.

Thus, when buying a used boat with a cored hull, even a survey is not going to prove a reasonable probability of a defect-free hull. Surveyors ought to be shivering in their shoes anytime they approach a cored bottom, so how much more trepidation should a buyer bring to the table?

So there you have it. The history of cored bottom performance is poor. Surveys that don't involve destructive testing can prove soundness. Buying a cored bottom boat, in my opinion, is little more than a roll of the dice. The odds are not in your favor.

How About Cored Hull Sides?

No problem. Hull sides are not submerged and are far less likely to become water saturated. The potential for hydraulic erosion is far lessened even if it does. And because the sides are vertical, water will collect at the bottom near the chine. Water saturation in sides is fairly easy to detect: All you have to do is drill a small pilot hole on the inside and see if water runs out.

Keep in mind, folks, that the industry tells us that cored bottoms are lighter and stronger. Lighter,  maybe. But here's your evidence of stronger.

The amazing thing about the boat building industry is that no one ever seems to learn from the lessons of the past. Want a job in the marine industry? Anyone can apply: no experience necessary.