The problems involving the coring boat of bottoms will not be going away anytime soon. However, the problem may be considerably relieved by a relatively new material called ATC Core-Cell – relatively new because the material has been on the market now for about ten years, but is only now beginning to get some serious recognition. ATC is the manufacturer and Core-Cell is the product name.

I decided to write about this (1) because a number of builders have complained about my attitudes toward foam as a core material, and (2) last summer I engaged in some serious testing of all types of core materials. This was done mainly in regard to how moisture meters respond to different materials. For these tests dozens of samples of material were obtained direct from manufacturers, among them Core-Cell. 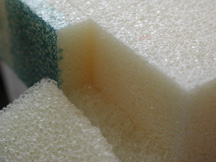 After floating on a pool of ink, we section the foam to see how far the penetration goes. 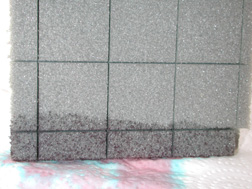 Testing for water absorbency involved a simple exposure test as shown in nearby photos where the foam was simply floated on a pool of ink for a period of time. In a more elaborate test, we submerged the foam under pressure. Tests for creep rate and capillary effect were also conducted. The last form of testing was for heat distortion where we placed the sample in the hot sun, overhanging an edge with a weight on the end. We then measured the amount of deflection that occurred as it heated up. Most types performed fairly well while only a few didn't.

Some foams absorb more water than others. This one with large cells and double kerfs takes up significantly more. 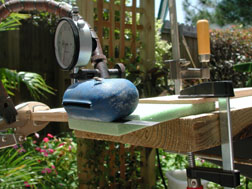 Testing for heat distortion, we load the sample with a weight and let the sun heat it up.

The interesting and disconcerting thing about foam is its general weakness. Take any type of foam core material and one can easily tear, crumble or shred it by one’s bare hands. You can dig your fingernails into it and easily crush it. When you see a demonstration of weakness like this, the first question that comes to mind is why anyone thinks this stuff is suitable for building boats with. You can shred balsa too, but only in one direction, along the grain; one cannot tear balsa perpendicular to the grain; moreover one cannot crush it by hand, so it’s obvious that this material is much stronger.

Now comes Core-Cell. Subjecting this stuff to these very simplistic tests we find that we cannot tear the stuff apart by hand. Neither does it crush. I can dig my fingernails into it, but not very far. In some respects it is stronger than balsa, and other respects pretty much the same.

Virtually none of the samples from other manufacturers even came close to the strength of Core-Cell.

Why is this important? The main reason is the tremendous impact loads that boat bottoms sustain. Balsa is good from the standpoint that the crushing force goes against balsa’s strength – the long grain. Any place where a cored hull meets a hull frame such as bulkheads and stringers, there is a risk of the core being crushed against the frame. Additionally, shearing forces are also set up at these points so that a core material has to be strong enough to resist shear. My assertion has always been that most foams simply do not meet these strength requirements. The proof of the situation lies in the fact that heretofore, almost no builders dared to use foam on bottoms, only sides and decks. Core-Cell is now the notable exception.

Core-Cell has had considerable use in custom boat building, but very little in production boats until the last two years or so. Consequently, there has been insufficient time for us to evaluate its performance. Typically, it takes a good ten years in service before we know how well any material performs. I began to note just last year that a number of builders are touting Core-Cell in their boat bottoms. If this stuff works – and I expect that it will – then I am all for it.

But does this mean the end of core problems? Nope, not any more than fiberglass produced more perfect boats than wood. There is always the temptation to stretch the envelop by using too little material, i.e., too little fiberglass. And quite a temptation it must be since so many do it. Here’s how:

The naval architect recommended ratio of outer skin to inner skin thickness is 3:1. It is not necessary, nor even desirable, to make both skin thicknesses the same for reasons I won’t get into here. Unfortunately, we surveyors are finding skin ratios at 4,5, even 6:1. I’ve seen numerous boats where the inner skin was only a single layer of light fabric or even chopper gun. That is so thin that one could easily just push a screwdriver through it; I know because I’ve done that.

The bonding of the core to the outer skin is always a problem. This is because the "down" side is always the blind side. It’s like laminating Formica onto plywood. It’s always difficult to make sure the entire area is in contact with the glue and sticks. Inevitably, there are areas we call "never-bonds" the areas that don’t stick. Usually these are pretty small and cause no harm, but if they’re large, this will promote continued disbonding.

So what happens if a foam cored bottom is breached and water gets into it? Since foam hasn’t been used on bottoms, the answer is that we don’t have any experience with this but we can extrapolate some possible problems. First, PVC based foam does not hydrolyze like polyester does; PVC is basically impervious to water. It is not, however, resistant to styrene, a major component of polyester. Most builders today use an outer skin coat of vinylester or isopthalic resin to prevent blistering. The inner laminates are usually ordinary ortho polyester which does hydrolyze. Do you see where I’m going with this? If water gets into the core cavity hydrolysis can occur, thereby releasing styrene in the same manner as blister fluid (which contains styrene) is created. Styrene will soften PVC foam. Theoretically, this isn’t likely to be a big problem since water intrusion is unlikely to occur over a very wide area, but theoretically it can happen.

A potentially more serious problem is one that we have already seen with balsa: hydraulic erosion. Closed cell PVC foam does not absorb water, even under pressure, yet this does not mean that the cored area cannot take up water for the small gaps between the blocks of foam contains plenty of air space which, unless vacuumed bagged, do not get filled with resin. Thus, a breach in the outer skin is very likely to allow significant amount of water ingress. In and of itself, even this is unlikely to cause a problem. No, a problem is unlikely to manifest unless the water finds its way to a never-bond and fills it up. Because the outer skin is not attached to the core at this point, this area will act like a diaphragm pump as the hull bounces along the surface. The pressures generated will be in the high hundreds and even a thousand of pounds per square inch.

At 500 psi water shot from a hose would bore right through a human body and will erode concrete, so you can imagine what it would do to a foam core. As the foam is eroded by water pressure, the area of delamination will increase until a failure occurs or the problem is discovered, whichever comes first. For this to happen, the breach through the skin would have to remain open, thereby allowing more and more water to enter.

As things stand at the moment, this is not a threatening scenario but for one likely factor. Because wet foam does not rot and does not absorb water per se, builders are much more likely to take a lax attitude toward preventing water intrusion. Why? Because they will come to believe that water intrusion will not harm a foam core. That is, if they don’t believe it already.

I can guarantee you that the term hydraulic erosion will become well-known and understood in the not-too-distant future. It is unlikely that this will even approach the massive problems created by using balsa on bottoms, but will happen often enough to give some boat owners heartburn. The only way to avoid this problem is by means of very careful design and fabrication, something that is not a hallmark of high production boat building.