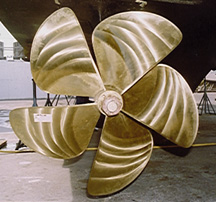 The answer to your question is "no."

There, that didn't take long, did it? Okay, but explaining why the answer is "no" is going to  take a bit longer.

In today's scientifically oriented society, we tend to live by the notion that there's always an engineer out there somewhere with a calculator that can figure out the answer to anything. That's not really the case. Engineering is the result of experience; no experience, no engineering. Create the thing, the equation that explains it comes after.

Nobody can tell you what the right size propellers are for your boat because there are too many variables involved. There are hundreds of thousands of boats of all sizes and shapes, as well as power plants. You may be thinking, "Oh, but my boat is just an ordinary 32' so and so, much like all the others out there."

Okay, to you it is, but not to anyone trying to figure out which propeller will offer the best performance. Propellering, you see, is more of an art than science. All boats are not alike, not even two of the very same model, at least not in terms of the possible variables that affect performance. Without writing a book on the subject, take it on faith that every boat presents an incomprehensible set of variables which are more or less unpredictable. You and your neighbor may both have a Trojan F32, but it is entirely possible that there are factors that make those two boats sufficiently different that each will need a different propeller. Our problem is that we do not know what those factors are, and we probably can't find out.

To obtain the technical solution to your propellering problem, we need a formula for each and every boat. A formula that is not available.

Engineers have been attempting to develop sure-fire propeller size selection tables right from the very first propeller. And right up to this day of computerization, no set of charts or tables has ever proved completely effective. I'll give you just one example that will illustrate the dimensions of the problem.

I was doing a survey one day and I happened to sight down the length of the keel of a 60 foot fiberglass hull. Something about it caught my eye, something that didn't look right. This prompted me to take a second look, and then to get out my measuring tape.  The keel of this yacht was found to hook 8" to the left. That's right, the hull of this boat was literally bent! You are wondering, of course, how the heck that could happen. The answer is very easy.

It was not the hull mold that was out of symmetry. What happened was that the builder had pulled the hull out of the mold before he added the internal structural components. Builders sometimes do this to increase their mold turn around time. If he was going to do that, the hull should have been placed into a jig that would maintain the shape of the hull as the framing system was added. The only way this curved hull could have happened was because the builder did not have a jig, and when the floppy hull was pulled out of the mold, it lost its shape. When the framing was added, the misshapen hull then became permanent.

That was a million-dollar-plus boat. Imagine the prospects for lesser boats.

Now, that 8" hook in the hull had an enormous effect on boat speed, and it was no surprise that during the six year life of this yacht, the owners (Yes, the first owner dumped it after two years) had been constantly playing with propeller sizing because it would not perform the way it was supposed to. But there were no propellers that were going to take that hook out of the hull. The point here is that there are endless factors that go into determining performance which cannot be anticipated, and which explains why you may not be able to simply refer to a propeller selection chart, hit the nail on the head, and live happily ever after.

If you have a problem with inadequate performance, when all the other boats like yours with the same props seem to be doing fine, then chances are that there is some peculiarity about your boat that is causing the problem. The real trick is in finding out what it is.

The Michigan and Federal propeller companies have computer programs that can tell you what the right prop size SHOULD be, but that does not mean that use of that prop will give you the performance you desire. It is one thing if you are merely attempting to optimize performance with the gain of a knot or so. Many boat owners are constantly doing this, playing around with prop sizing, which can get very expensive.

If your problem is more than a knot or so, if you are dealing with a major performance deficiency, then it is unlikely that propellering is the nature of the problem, or that changing props will solve it. It is more likely that you are dealing with a major fault(s) that may lie in any one, or combinations of many, possible factors. Not very encouraging, is it? No, and that's why it's not a good idea to go fooling around with propellering to try to solve a major speed problem.

Yes, we would all like easy answers, but there aren't any, and least of all from someone who knows nothing about your boat. Builders and designers first choose props from calculations and charts. Rarely do they hit it right the first time. Back in the heyday of Bertram Yachts, there wasn't a day go by that I wouldn't see a Bertram out zooming around on Biscayne Bay at full speed. What they were doing was constantly testing propellers and speed. Bertram, you see, used to certify their boat speeds upon delivery. I don't know of any other builder who does or did that. So when you think about all those boats that are built in plants that are nowhere near the water . . . . well . . . it's not hard to see why there are so many performance problems.

The only way to efficiently resolve the problem is to hire an expert. But there are not many experts around, and it may take him a long time to find the problem, especially if it is a combination of factors, which it usually is. One ends up going through a process of elimination, which is very time consuming and costly. The sad fact is that people with major performance problems usually end up stuck with them, even after spending a lot of money to find out why.

Some of the responses I get to this web site blast me for being so "negative." That's true. This web site is all about what can go wrong. They complain that I don't present a "balanced" picture. Nope, I don't. If you want a balanced picture, go read the boating magazines. They will make you happy. There are all those questions and problems about poor performance out there because there are so many builders turning out poorly performing boats, and people paying huge sums of money for them without checking before they buy.

If you want to know how bad it really is, consider that there is one popular builder out there that has been turning out essentially the same poorly performing boat for around twelve years. The people who buy them don't know any better. They don't know the difference between good and bad performance. Only later do they find out when someone asked, with raised eyebrow, or suppressed smirk, "Does your WaveBaster 39 perform alright?" Only then do they start thinking about it.

Most of the time when I do sea trials on poorly performing boats, the buyer says, "I'm not really concerned about the speed." Of course, a new or used boat being sold is empty. When he loads it up with fuel, water and provisions, that 18 knot boat is now a 15 knot boat, and suddenly the fellow is very concerned about speed. Albeit a little too late. So now he's going to play with propellers, when propellers aren't the problem.

Test before you buy because a lot of builders don't.

However the boat performs on the day you pay for it, realize that it's only going to get slower as you add weight and the engines get tired.

Stuff grows on the bottom and propellers, slowing it down. Clean bottoms are the exception, dirty bottoms the norm. How will it perform with a dirty bottom if performance is so-so with a clean bottom and empty tanks?

If the performance is marginal on day one, it will be unacceptable on day 301.

The best solution is not buy into the problem in the first place.

After the fact resolutions usually fail, and at great cost whether they fail or succeed.

Be wise; file trust and faith in file 13.

Look before you leap.

If you don't know the right questions to ask, find someone who does.