Is Your Boat a Leaky Tiki?

If so, it's probably going to cost you big bucks if you don't get those leaks fixed fast.


Water leaks into a boat may seem to be merely aggravating, but most often they end up turning into a calamity. Every week I detail tens, even hundreds of thousands of dollars worth of water damage caused by leaks in the boats I survey. At years end, if I totaled them all up, we'd be talking millions, so this is no picayune issue.

I'm reminded of this every year when rainy season rolls around, for that's when the problems really show up. This year we had three tropical storms dump around twenty inches of rain on us so that if a boat had leaks, they tended to show up big time. 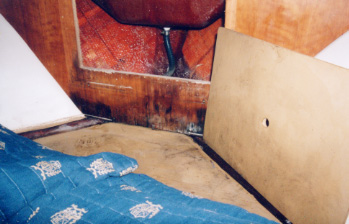 Damage from a deck join leak on a four year old boat. Value of

The fact is, most boat owners never bother to look, or if they do notice a leak they're too busy to bother to do anything about it. That's a big mistake because leaks can cause very costly damage, so it's wise to keep your eye open for them and to stop trouble before it gets too expensive. Frankly, I wouldn't care at all but for the fact that I'm the one that usually delivers the bad news to them.

I see the crestfallen looks on their faces, as well as the jolts of recognition that tells me that they knew about the problem all along, but chose to do nothing about it other than merely smear a little silicone around, which is like putting a Band-Aid on bullet to the head wound.

Leaks tend to occur in the same areas in all, or at least most, boats for common  reasons. One of the worst is the hull/deck joint. Deck joints tend to leak since this is a huge joint -- in a 30' boat it will be about 75 feet in length -- because it is highly stressed, and because it is hard to seal in the beginning.

Deck joint leaks can cause a lot of damage because when water comes in, it runs down the inside of the hull. That causes problems with dampness and mildew because water gets trapped in places where it doesn't get pumped out, but evaporates, raising the interior humidity level, thereby facilitating mildew growth. Even worse, are the various structures that are attached to the hull sides. This includes things like shelves, cabinets, lockers  and (hope you're ready for this) your bed.

I see many owners who resort to putting dehumidifiers aboard that to me are a sign that fairly shouts "Look for the Leaks." Or there are those cans of Damp Rid scattered around, or they leave the AC running most of the time. 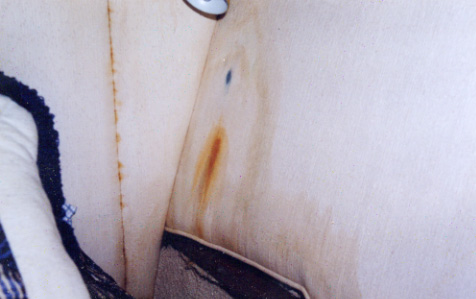 This obvious deck leak was allowed to fester for years. There is a lot more damage than can be seen in this photo. The end result was a $500K boat becoming a $200K boat in just a couple years. Leak repair cost would have

Some of the most common damage is to berths in the forward cabin which are glassed to the hull sides, usually incorporating the berth structure as part of the hull structure. Water comes in through the deck joint, runs down the inside of the hull until it meets with the horizontal bed foundation where it puddles and does its damage. Here we're usually dealing with plywoods and veneers, cabinet work, and none of it cheap stuff.

This leakage often goes unnoticed because there is some kind of liner on the hull side, like foam backed vinyl, where the water runs under the liner hiding the leak. This can go on for a long time until someone lifts up the mattress and discovers all the damage it has done, Damage like rotting the mattress bottom and the plywood foundation. But it also leaks onto and into fine wood structures such as vanities and cabinets where the damage can become very costly to repair.

Boat owners should make it a point to check for leaks occasionally. Check under the mattress and look all around at the various cabinets, shelves and so on. Water stains and discoloration signal the presence of leaks even when no water is present.

Interior mildew problems almost always signal interior water leakage. Thousands of boat owners automatically assume that this is an atmospheric problem. It may be that excessive amounts of water standing in the bilge, which the pumps won't remove, can cause excessive mildew, yet more often than not it is a water leak.

Back in the mid cabin area, deck joint leaks often show up in galley cabinets and shelves. The first telltale evidence usually comes from rust strains from steel cans and colored  foot prints from the bottoms of packaged goods boxes. This can be true of any storage area that water is getting into.

Now we come to the main reason why boat owners prefer to ignore leaks; they can be difficult and costly to repair, but not always. If a leak has been existent for any length of time, it will have left a trail that will lead to its source. At least most of the time. The trouble is in getting at the area to locate it since nowadays in most boats there is little or no access to the deck joint. Builders build boats based on the assumption (or the disregard) that they'll ever need repair.

The best way to repair a leaky deck joint is from the inside. But barring that, an attempt can be made from the outside, which is better than nothing. Removal of the rub rail is likely to reveal suspect sources for leaks. These should be caulked with 5200 (forget silicone and most other caulks because they won't work) and then the rub rail put back on. Good idea, too, to caulk the screw holes as the screws are being driven in. If you can get at the inside, it is best to do the caulking from there.

Note that water can enter in one place, but come into the boat three or four feet away from the point of entry. This is due to the nature of the lap joint itself. Thus, a fairly large area should be inspected at the outset. Just because you see one potential leak spot doesn't mean that there isn't another.

Railing stanchions are the most common culprit due the tremendous leverage that gets applied to rail stanchions, plus it's very difficult to design structures that can carry these loads adequately. To make matters worse, stanchion leaks and deck leaks can often appear to be coming from the same area, making it harder to determine which it is. This usually necessitates dropping a small part of the headliner and/or removing some valences.

One can also try a water test with hose pressure since the deck joint leak most often only occurs while the boat is underway, but that will depend on what type of joint it is. Water will usually NOT come in with a vertical lap joint, but it will come in with a horizontal lap. That is because with the vertical lap, water has to be pushed up from below, whereas with the horizontal joint it can  enter from above. While this is not an absolute rule, it holds true most of the time.

Once you get at the underside of the hardware, it will become glaringly apparent whether it is leaking or not.

These cause more damage in $$$ than any other type. The most common results from water being thrown around the engine room by a rotating part, such generator flywheel or shaft or coupling. That so many boats suffer from this kind of damage tells me that there are a lot owners who just hop aboard, start their engines and go, without ever checking the engine room. Because, if they had, they couldn't fail to observe the damage these leaks were causing.

The telltale evidence of this type is excessive corrosion occurring. When you see it, you need to do something about it pronto.

Another source of leaks is from above, usually involving the hatch covers of whatever type. These can be a little harder to identify. The way to do is to check the engine room either while it is raining or after washing down. Since such leaks are usually fresh water, the evidence is not always as apparent, so what we need to be looking for is wet spots and water in places it shouldn't be.

Now you know why I rant and rave about engine room access so much; if you can't get into an area to see what's happening, such things tend to go unnoticed.

You can check occasionally and pay a little now, or ignore your boat and, come time to sell it, have some surveyor tell you that your boat has tens of thousands of dollars worth of water damage and lose the sale as well. It's your money, your call.