Two years ago, in response to a question about the longevity of Yanmar diesel engines, I wrote that I had serious reservations about the extensive use of cast aluminum components on those engines. Up to that time, we hadn't heard of any serious problems with the engines, but then, they were fairly new on the market at that time.

I now have the answer, along with documented, photographic evidence of how well those aluminum parts are holding up.

My original doubts were founded on other engine company's attempts to use cast aluminum. First came Johnson & Towers, the remarketers of Detroit Diesels. Some time in the late 1960's they tried using a cast aluminum heat exchanger tank. In those days, aluminum alloys weren't so good, and tank wide spread failures occurred.  Nor did it escape my attention that it was J&T who tried this, and not General Motors. Seems the GM people knew better.

Not to learn from other's mistakes, soon it was Perkins Engine Company who tried aluminum parts. My own father was a victim of this debacle when both the combined heat exchanger/exhaust manifolds on his engines failed. Replacement cost was a whopping cost of $6,000 each!

Next, along came US Marine and their marinization of the Japanese Hino diesel. Same story, a combined aluminum heat exchanger/exhaust manifold casting at an equally horrendous cost to replace.

Not to be outdone, now comes Yanmar with the very same  combined aluminum heat exchanger/exhaust manifold castings. Shown in the photos below are the very predictable results. In this case, both castings on both engines failed at about the same time. 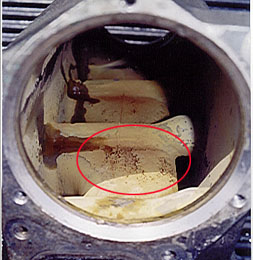 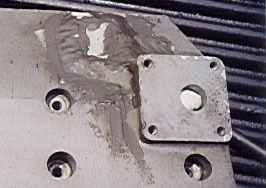 So what's wrong with using aluminum parts? Dissimilar metals. Here we had three engine companies that tried to brass heat exchanger bundles into an aluminum tank. Brass and aluminum are far apart on the scale of electrical potential of metals. Hence, the aluminum becomes anodic to the brass, just like the zincs you use on your shafts are anodic to stainless steel. It doesn't take long for them to disappear.

Even though the cooling system is filled with an anticorrosive coolant, that is not going to stop galvanic corrosion.

Bottom line: The effort to make diesel engines lighter by using aluminum components for the cooling system isn't going to work. And, of course, these parts didn't finally fail until the engine was long out of warranty, so the boat owner had to foot the bill.

Fortunately, there is a better way to reduce the weight of cast iron tanks. Most other manufacturers are using formed brass plate tanks. Brass tanks, brass tube bundles, no problem. And the cost is a lot less than a  machined casting.