Illustration of
Water Absorption From a Hull Interior

Quite a few people have written or called to tell us that they know of some proven methods of repairing bottom blisters that constitute a full and final solution. Each of the systems and products offered by West, Ashland Chemical and International Paint were mentioned. These, of course, are the most widely used products, but are also the most frequently involved in the failures, if only by virtue of their widespread use.

Some of the people who suggested that the information offered on this site was incorrect were surveyors, stating that they were sure that these methods and products worked. We pointed out that not ALL blister repair jobs fail, nor did we suggest that to be the case. Only that far too many do fail.  To those who stated that they knew of foolproof repair methods, we posed the question, "How long after the repair jobs did you conduct follow-up inspections to ensure that the repair was, in fact, effective?"

This threw quite a wrinkle into their arguments.  It is time-consuming and costly to perform follow-up studies and, as expected, none of those who differed with our views had done so. They were basing their opinions merely on the fact that they hadn't heard about the repairs failing, and so their assumption was that it worked out fine. This is rather typcial of what passes for knowledge in the boating business - mainly a lot of hastily conceived conclusions generated from hearsay and assumption.

It was stated in another essay on this site that effective blister repairs could not be guaranteed because coating the hull from the exterior could not insure that it would not once again absorb water from the interior. At the time that essay was written, we hadn't yet any good photos revealing just how much water can be absorbed from inside of a hull. That has now changed. Just recently we came across a boat that yielded up some pretty good photographic evidence. Now we have the photos and they're shown below.

The boat in this example is a Trojan International 10.8 meter, ten years old and a one-owner boat that had never had blisters on the bottom. It had spent its entire life docked on a canal in South Florida where summertime water temperatures are as high as 92 degrees. This is a very well built hull of solid laminate, of conventional roving reinforcement. It was so thick and hard that when we sounded it with a steel hammer, the hull "rang." No dead, dull thumps on this one. And there was not one blister on the bottom. Now take a look at the photos we took of the interior hull.

As with most hulls, its painted or gel coated throughout most of the interior. But up in the bow section we found some areas that weren't.  Here's what we found: 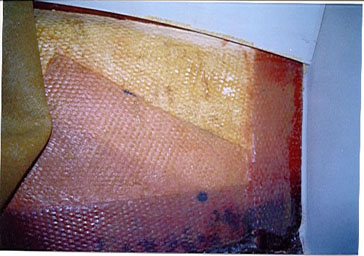 Photo #1.
This photo is taken in the forward cabin just above the point where the sole is taped into the hull sides and below the waterline. When I first lifted the carpet here, I was taken aback because my first impression was that the cabin sole tabbing had been laid over painted fiberglass, since the aft section of the interior hull was painted. As you can see, the tabbing is a pink color while the hull laminate seen at the top of the photo is not translucent like the tape but completely opaque. (Tape or tabbing are the strips of fiberglass used to join parts together, such as a bulkhead to the hull in this case.) 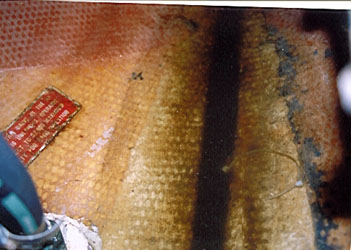 Photo #2.
This is one of  the most graphic illustrations you will ever see  of differing rates of water absorption in various areas of one hull. This is looking straight down at the centerline bilge in the forefoot where a bit of black water lies at the bottom of the vee (the black vertical line). The yellow section at the center is a separate layer of fabric which has absorbed far more water than the surrounding laminate and turned yellow. Whereas in the upper part of the photo, you can see a different layer of fabric that is pinkish and is not as opaque, meaning that it has absorbed less water. Notice that the coloration is the exact opposite of that in photo #1, where it is only the tabbing that remains pink and translucent. Since both sections of laminate are equally hard, most likely what this is telling us that two different kinds of resin were used in this lay up. Because of the hardness, cure rate does not seem to be a factor as it is in many cases. 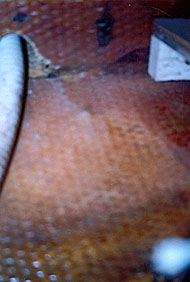 Photo #3.
This photo was taken a few feet further aft. Its the hull bottom between the keel and the stringer (top of photo). Here the laminate has a blotchy appearance - its whiter toward the left and center, while a more translucent area is seen at right. At the bottom is an oily bilge high water line. The stringer has absorbed very little water and remains translucent, whereas the bottom laminate has turned opaque.  The differing colors, which are not just surface contamination, suggest that chemicals in the bilge water have also played a role in the discoloration.

What is most distinguishing about this photo (#3) is the progressiveness in the change of color of the laminate down toward the keel; the deeper in the bilge, the more opaque the laminate. When a laminate, or plastic, absorbs water it turns cloudy or opaque. We take this as clear evidence of just how much water a hull can absorb from the interior.

We don't often get to see examples like this because the interior of most boat hulls are painted. So what is the meaning of these examples of differing laminate layers absorbing more or less water? For one thing,  it is a dead giveaway that different batches of resin were used, or that the same resin was handled differently, such as catalyzing, accelerating or hardnening agents.  Secondly, that some laminates absorb more water than others, some from the interior and some from the exterior.

Further, these photos also demonstrate (as we already know) that water migration through a laminate follows the fiber bundles via the capillary effect. And that there is much less tendency for water to pass from one layer or lamination to another. Why is that so? Because the fibers don't extend from layer to layer, but only horizontally within a layer.

Here we have an excellent example of a hull that is fully saturated with water and yet it has not blistered. Not one. It also proves that hulls can absorb a great deal of water from the interior, and the reasons why recoating the exterior so often fails to solve the blistering problem IF a hull is prone to blistering.

So why didn't this boat blister? We have less than a complete answer to this question, but we did obtain some indicators. One is that the resin used is not so superior that it resists water absorption*, yet it has displayed no tendency to blister. Another is that the layup quality is well above average - we found no evidence of void spots or incomplete wet out at any point where the laminate was not painted. As you can see in these photos, there are no areas of unwet fibers visible, nor did we find any in other areas.

Although this boat was in the process of being sold, and we could not attack the bottom with a grinder, a little digging with a knife determined that the skin out mat on the exterior is very thin, probably less than 1/8". What this means is that it does not have a thick layer of mat (which is very difficult to wet out) that is full of voids and unsaturated fibers. This would tend to confirm our belief that incomplete wet out is a primary factor in the blistering process.

This is yet another example that leads us to conclude that the quality of workmanship in the layup process plays a major role in blister prevention. Yet that alone cannot explain why this boat did not have any blisters, for it is entirely unreasonable to assume that there are no voids or unsaturated fibers in the bottom outer laminate: that is impossible. Even though the resin is highly permeable, no chemical reactions occurred to result in blisters. Clearly, there must be something about the quality of the resin that prevented this.

But it is equally clear that, if a hull can absorb water from the interior, recoating the exterior is no fool proof solution to blister repair. Due to the fact that water does not migrate as easily through a laminate as along its length *, recoating with a less permeable resin can have a major effect on the extent of blistering that can occur. But these examples should make it pretty obvious that no repair process is going to guarantee a permanent fix.

*  Laminates tend to conduct water along the longitudinal axis becasue the fiber bundles, which are never completely wetted out, conveys water readily via the capillary effect. Water absorption by the plastic resin is a much slower process, possibly involving hydrolysis. The term "water absorption" means the induction of water into the laminate by any means.

Capillary Effect: The tendency of a fluid to conduct itself or flow through narrow passages, e.g. a capillary.  Adsorption, absorption, catalysis, diffusion, osmosis and permeability are all terms that are closely related.

Permeable: The ability of a fluid to pass through or penetrate a solid; porous, porosity, passable, penetrable.

Hydrolysis: A chemical reaction in which water reacts with another substance to form two or more new compounds.

Osmosis: The flow or diffusion of a fluid through a semi-permeable membrane, initiated by differing concentrations of that solution on each side of the membrane. It should be noted that osmosis does not occur through a membrane where the solution exists only on one side. The membrane, or material, must first be permeable for osmosis to occur.

Permeate: To pass through pores or interstices.

Semipermiable: Partially but  not freely or wholly permeable; of or constituting a natural or artificial membrane that is permeable to some, usually small molecules (as of water or inorganic salts)  but bars the passage of other, usually larger particles.